Debate for Change Tournament is the first of our new ACAMIS student initiated activities. It originated through ACAMIS Service Learning Awards where one of the grants at the 2018 Spring Leadership Conference went to students from Dulwich College Beijing who created a debate contest to raise funds to support charities. It is heartwarming to see student involvement of this kind. ACAMIS has now adopted the debate activity as an annual event with Dulwich College Beijing. Participation is open to all ACAMIS member schools and we hope you will become involved. A team of three persons or an individual can take part. Although three prizes will be awarded, Debate for Change is meant to be a learning experience and anyone or any team can take part. Experience is not required, but keen interest in debate or public speaking will enhance the learning opportunity. Over an exciting two days, students will grow as critical thinkers, collaborate as debaters, and gain awareness of service in a local community while interacting with fundraising in a more personal and engaging way. Anyone interested in leadership, the study of law, public relations or public service will benefit immensely from this experience. The event is designed for middle school students (Years 7, 8, 9/Grades 6, 7, 8) and lower secondary students (Years 10, 11/Grade 9, 10). For an example of the event, see the photos and information from the previous year below.

Join us for this unique student-initiated and student-led event! 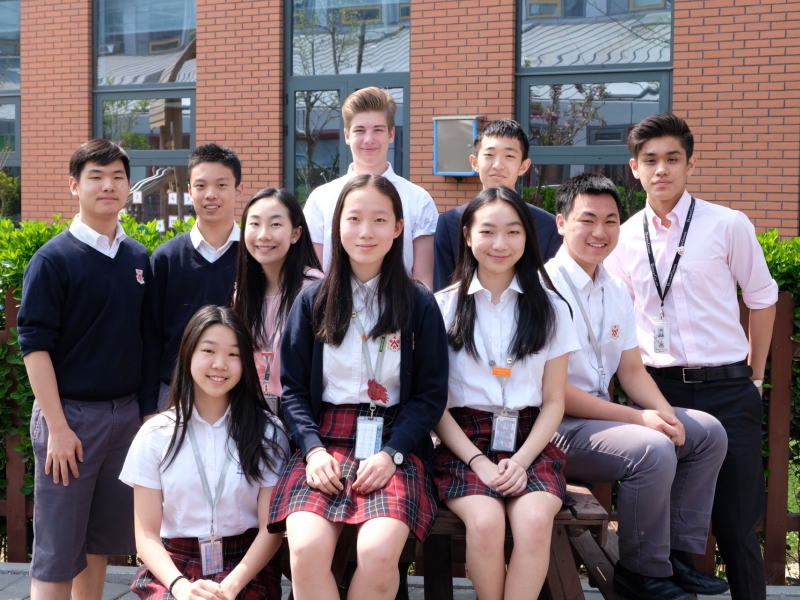 We are proud to announce a new executive team who will continue to organise the Debate for Change Tournament. The student team will be led by Yi Xin Lee (Director of Operations) and Erik Chen (Director of Strategy), ably advised by Kevin Yao and Ryan Zeng. We are sure they will work hard to continue this legacy of bridging debate and service and look forward to see what they will achieve in the coming year.

Due to covid restrictions, the tournament will be cancelled this year.

If you are passionate about debating and/or service, this is a competition designed for you!

The DCT is open to all Key Stage 3 (Year 7, 8, 9 or Grades 6, 7, 8) and Key Stage 4 (Year 10, 11, or Grade 9, 10) students regardless of experience in debating. Students are welcome to sign up in teams of three or as individuals; we are more than happy to help students find teammates. To provide students with an educationally rich experience, teams from across China, Mongolia and East Asia have been invited.

1. HOPE (Horses Offering People Enrichment)
HOPE offers therapeutic horsemanship lessons to individuals with special needs. They provide enriching and fun horseback experiences for children and adults, which has proven to be effective for developing motor skills, nurturing growth and healing from disabilities, and fostering communication and social skills. For more information, visit their webpage at hopebeijing.org/
2. MCF (Migrant Children's Foundation)

MCF primarily works with migrant communities in Beijing. They conduct numerous activities and enrichment programs at different migrant schools, aiming to provide a more well-rounded education and better access to healthcare for migrant children. For more information, visit their webpage at mcfchina.org/

3. Dew Drops Little Flower
Dew Drops Little Flower is a charity that provides a home environment for abandoned children, alongside with intensive nursing care. They also run a temporary home for families in need of support, offering financial, emotional and medical support for the child's treatment. For more information, visit their webpage at dewdropslittleflower.org/

The competition will be cancelled this year due to COVID restrictions.

The participation fee is 350 RMB (with tax) per person which will include both lunch meals, official merchandise and an incredible opportunity to debate with students from all over Asia. All students will also receive a participation certificate, while top teams will receive trophies and the choice of which charity to support.

Individuals or teams from outside Beijing are also welcome and as with other ACAMIS events, are responsible for their own transportation and accommodations costs and follow their own school's field trip/excursion requirements. Dulwich College Beijing will recommend accommodations near the school.

No preparations are needed – just show up and debate!
On the first day of the tournament, the DCT Team will host a students' debating workshop which will help provide assistance and guidance to new and experienced debaters. However, if students would like to improve their debating skills prior to the tournament, the DCT Team will be sharing additional resources to students upon signing-up to help give students more guidance. 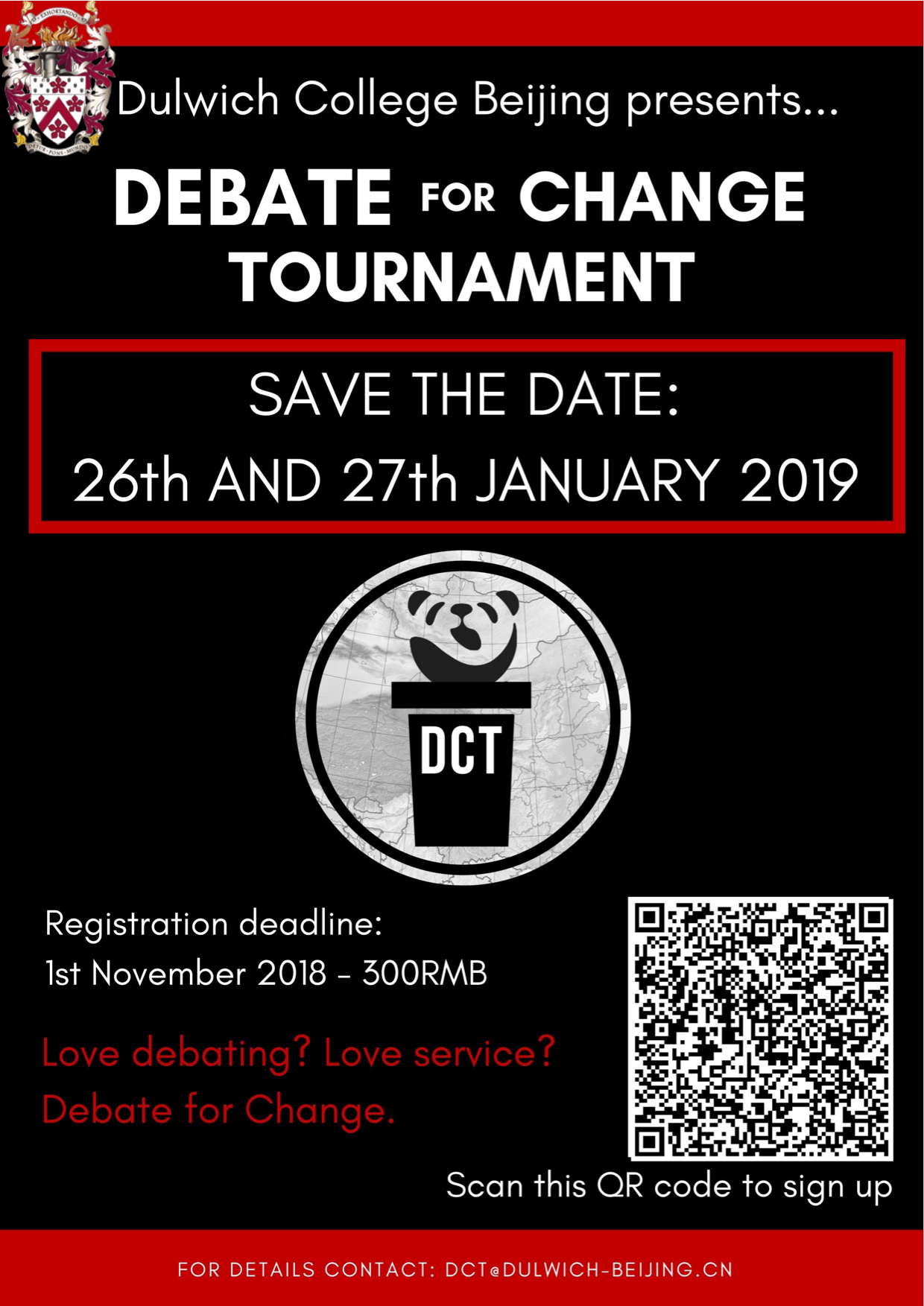 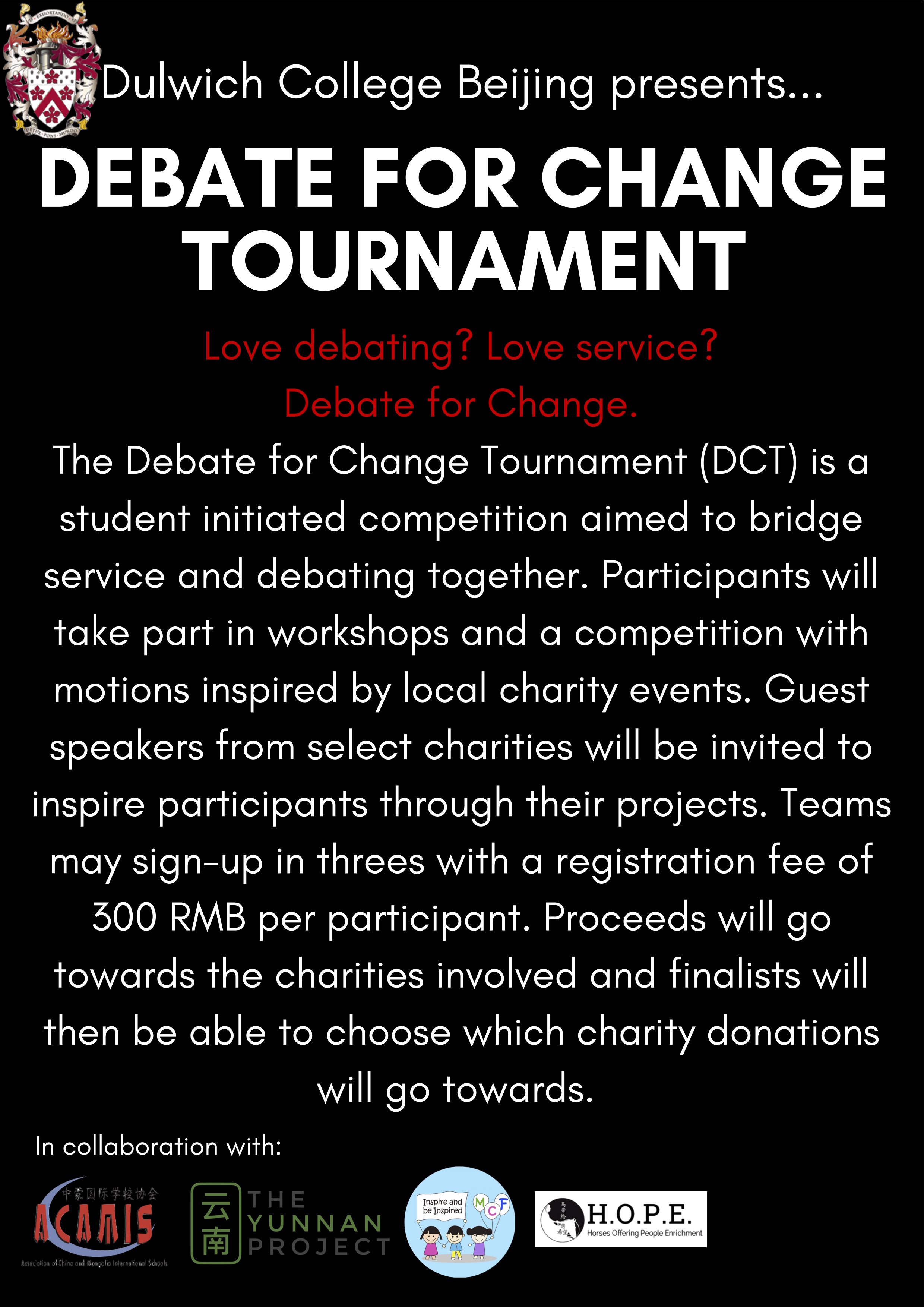 From the 26th - 27th January, 220 participants from 9 different schools raised awareness about and fundraised at the first ever Debate for Change Tournament (DCT). Three main charities were supported at this tournament: Horses Offering People Enrichment (HOPE), Migrant Children’s Foundation (MCF) and the Yunnan Project.
On the first day, debaters listened to charity guest speakers, which allowed them to learn more about the charities represented at the DCT. They then took part in student workshops to develop their debating skills, before taking part in a knock-on competition, discussing motions inspired from the charities. These ranged from whether the Yunnan Project should prioritise vocational skills in their lesson plans or whether MCF should give glasses only to those with high academic attainment in migrant schools. An intense final match between Dulwich College Beijing and Tsinghua International School resulted in the DCB team - Jeffrey W, Guan Rong T and Andrew Y – emerging as the Top Team.
On the second day, a Charity Bazaar allowed participants to get to know more about other local service initiatives, with participating projects including ARC Design, HOPE, Little Galaxy, MCF, Project Nightingale, the Sustainable Development Goals' Club and the Yunnan Project. This involved photo booths, busking and the sale of goods ranging from brownies to tote bags.
A total of 30,000 RMB was raised for the three main charities. To make fundraising more personal, the top three teams were empowered with a choice to allocate this sum to their chosen charities. The first place team donated 15,000 RMB to MCF; the second team donated 10,000 RMB to the Yunnan Project; and the third place team donated 5,000 RMB to HOPE.
DCT is completely student-led with a student executive team made up of 7 DCB students: Yi Wen L, Kevin Y, Ryan Z, Yi Xin L, Eric C, Erik C and Daniel C. Thank you to ACAMIS for the Service Learning Grant for helping to support this project and to all the teachers and students who took part.
Participating schools included:

Back to ACE Events page